View source
watch 01:36
We're Getting Mutants in the MCU - The Loop
Do you like this video?
Play Sound

A local celebrity. The coolest of the cool!

The most stylish girl in the city! Does that though exterior hide a heart of gold?

A close friend of Sophie, and one of the main characters in the game. She will frequently appear in the players boutique and is the first customer the player will have to serve in the game. An amazing model and is known as a "Queen of fashion".

Ricky: Callie and Ricky have a close relationship, and is like a little sister to Ricky, as stated in his profile. It appears, however, that Callie may have feelings for Ricky. Callie is relieved to find out that Ricky was not asking the player out after asking her to speak in private, and is shown to be flustered when Sophie states during a party that Ricky was staring at her.

Sophie: The two are very close, and are more often than not together when greeting/talking with the player. Sophie often teases Callie about Ricky and her insecurities/nerves, though always good-naturedly. 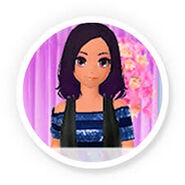 Callie in her Sally disguise.
Community content is available under CC-BY-SA unless otherwise noted.
Advertisement